Growing up my parents both labored to teach me the value of honoring the men and women who have or are serving in America's armed forces. My father is a veteran of the Vietnam War and my mother is a red-white-and-blue-blooded patriotic southerner whose roots go all the way back to Colonel James Barnett who fought in the 6th and 2nd Virginia Regiments which served under General George Washington during the famous Delaware River crossing at Trenton, NJ when Washington's forces rowed across the river to surprise England's Hessian mercenaries on December 26, 1776.

Colonel Barnett served his fledgling country until the war's end when he returned to Virginia to enjoy the freedoms that he and his comrades had so recently fought for. They were, and are, freedom which many in my family line have served and sacrificed to protect and defend, from the Revolutionary War to the War of 1812, then the Civil War, at the Alamo, and in World War I and II, Korea, Vietnam, Iraq, Afghanistan and beyond.

Many came home from their respective conflicts; many did not and their bodies lay in states of honor in cemeteries across the nation and around the world. It is a humbling experience to walk the hallowed grounds of Arlington or other American military cemeteries to find the resting places of these ancestors who "gave the ultimate sacrifice" in the service to their country, this country, the United States of America.

I admit that given the cost paid by so many families throughout America's history, a part of me wishes more of my fellow-citizens paid closer attention to the true meaning of Memorial Day, a holiday whose original name almost holds more meaning: Decoration Day. Indeed, one veteran from Indiana spoke those same concerns in 1913 when he lamented that people born after the Civil War had a "tendency... to forget the purpose of Memorial Day and make it a day for games, races and revelry, instead of a day of memory and tears" (yes, some called it "Memorial Day" back then). The grandson of an original Angel, 1LT Andrew Carrico III of Company D, 511th Parachute Infantry Regiment, 11th Airborne Division, Jeremy is an expert on all things 11th Airborne related and has spent more than ten years studying to division's history and interviewing the last living veterans of this mighty combat unit from World War II.

DOWN FROM HEAVEN: THE HISTORY OF THE 11TH AIRBORNE DIVISION IN WORLD WAR II - VOLUME 1: CAMP TOCCOA TO LEYTE CAMPAIGN will dive into the history of the original 11th Airborne Division and the officers and men who helped form this esteemed unit which set a "record unmatched in the history of the airborne."

In DOWN FROM HEAVEN you'll read exciting first-hand accounts of the division's experiences during their stateside training periods as well as their bloody campaign to retake Leyte island from Imperial Japan. This book will bring feelings of deep respect and admiration for the young Angels who came "Down from Heaven" on parachutes and in gliders in the service of their country in World War II. 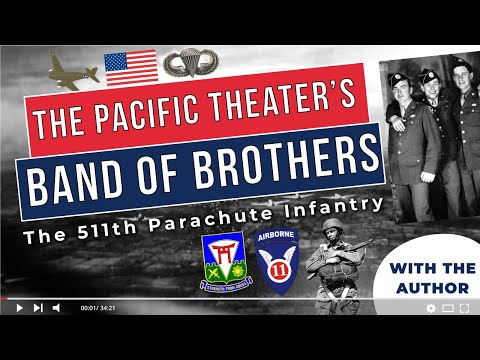 When Angels Fall: From Toccoa to Tokyo, the 511th Parachute Infantry Regiment in World War II

"American bobsled athlete, author and regimental historian Jeremy C. Holm talks about and reads from his best-selling book, WHEN ANGELS FALL: FROM TOCCOA TO TOKYO, THE 511TH PARACHUTE INFANTRY REGIMENT IN WORLD WAR II. Listen as Jeremy shares little-known stories and facts from this historic regiment gleaned from his decade-long quest to research his grandfather's 511th PIR. In addition to uncovering countless aspects of regimental history, Jeremy was able to interview some of the last living members of the 511th who are proud to have their stories told for the first time, including his grandfather 1st Lieutenant Andrew Carrico of Company D who died before publication. 75 years ago, after forming at Camp Toccoa, Georgia under Colonel Orin D. "Hard Rock" Haugen, America's 511th Parachute Infantry Regiment was physically committed to combat in the Pacific Theater on Leyte and Luzon where they played key roles in the liberation of the Philippines during 204 days of combat. After suffering 1,100 casualties, the 511th PIR became the first foreign regiment to occupy Japan in the country's long history after receiving (as part of Major General Joseph May Swing's 11th Airborne Division): 13 Unit Citations, 3 battle stars, 2x Medals of Honor, 9x Distinguished Service Crosses, 432x; Silver Stars, 10x Legion of Merit medals, 56x Soldiers Medals, 1,515x Bronze Star Medal and 41x Air Medals. Signed copies of Jeremy's book on the 511th PIR and 11th Airborne can be purchased here: http://511pir.com/store. Unsigned copies can be purchased on Amazon, at the Camp Toccoa Museum, and wherever military history books are sold. In WHEN ANGELS FALL you will learn about one of America's most elite fighting forces and one of the only parachute units to fight in the Pacific Theater. Their loyalty to each other, ability to endure combat's harsh realities and the emotional struggles they faced to help win the war has earned the 511th PIR the nickname, "The Band of Brothers of the Pacific." For more information on the regiment, visit: http://www.511pir.com For more information or to contact Jeremy for speaking engagements or question on the regiment, visit: http://www.jeremycholm.com Book Testimonials: "I don't read many books these days, but I really enjoyed reading WHEN ANGELS FALL. It is so good and well-written and I even learned so much about another branch of service other than my beloved Navy." -Rear Admiral Edward Kristensen "I believe this book to be a significant contribution to Army and national history. Jeremy has done himself and all the soldiers of the 11th Airborne good with his writing." -Major General Albin Wheeler, Commander, Army and Air Force Exchange Service (AAFES) "Jeremy Holm tells a story of his grandfather and the history of the 11th Airborne in a masterful way that guides the reader from Camp Toccoa to Tokyo. I know you will find this book rewarding and it will help you better understand, not only the 511th PIR, 11th A/B, but the Pacific Theater of Operations." -Lieutenant Colonel Douglas Massie, Commander, 127th Airborne Engineers Battalion "As one who was liberated along with my parents and younger brother from the Los Baños Prison Camp in February of 1945, once I started to read When Angels Fall, I couldn’t put it down. It is an utterly fascinating story..." -Robert Wheeler, internee rescued by the 511th PIR on February 23, 1945 "A masterfully executed recollection of many accounts of many 511 troopers that somehow keeps you focused as it jumps from one group of man in one episode to another. This is a must own book! It’s easily the best source of information out there." -Trevor Larson, unit historian "An excellent, interesting and well-researched read about the other ‘Band of Brothers’, the heart of the only US Airborne Division, the 11th, who fought the Japanese in the Pacific Theater. Great reading for any student of history, World War II or men in combat." -Ralph, Amazon review 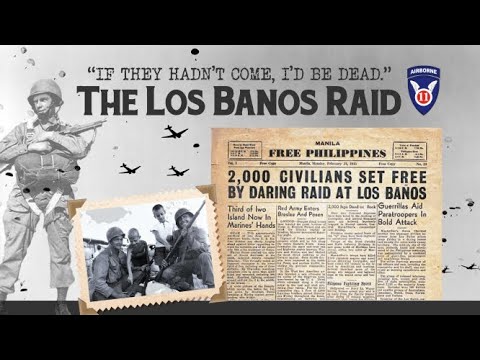 It’s been called the textbook operation of World War II. It was the greatest prison rescue ever; over 2000 prisoners of war liberated and not one them or their liberators killed. Unbelievably, the liberation of Los Banos prison camp by the 511th Parachute Regiment and Hunter’s Philippine Guerrillas went largely unheralded. To share the story of this amazing operation, the MacArthur Memorial hosted Jeremy Holm, author of When Angels Fall: From Toccoa to Tokyo, the 511th Parachute Infantry Regiment in World War II.

The saying that "There are no atheists in foxholes" holds almost universally true, though the soldiers, sailors, or airmen (or -women) may call their god by different names. It is the provenance of those called upon to fight for their country, or their deity, to find strength in faith (if they so desire), even if it is a faith they had previously forgotten or held with little regard. While in the words of General William Tecumseh Sherman "war is hell", God has the capacity to help the individual warfighter (and civilian) experience the help and strengthening hand of Heaven during his or her service.

The inspirational servant Mother Mary Teresa Bojaxhiu, honored in the Catholic Church as Saint Teresa of Calcutta, once said, "There's nothing more calming in difficult moments than knowing there's someone fighting with you." Anyone who has "felt the rumble of the guns", "heard the snap of the bullets" or "fired in anger" knows intimately the comfort that comes from knowing that you are not fighting alone, and what greater "foxhole buddy" can there be than God?

Countless soldiers can testify as King David did that during their time in combat, "The Lord (was) my strength and my shield; my heart trusted in him, and I (was) helped: therefore my heart greatly rejoiceth; and with my song will I praise him." (Psalms 28:7).